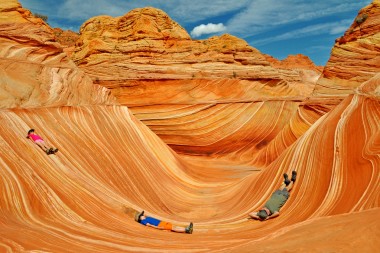 With five national parks, eight national monuments and countless wilderness trails, Utah is an adventurer’s paradise. Whether you’re looking to go canyoneering at the Grand Staircase-Escalate, or hike The Narrows at Zion, creating the ideal list of things to do while you’re visiting from out-of-town can be tough.

If you’re craving some adventure but not sure where to begin, we can help. Here are just a few places to visit in Utah that should be on your bucket list.

The Wave at Coyote Buttes near the Arizona/Utah border is a sandstone rock formation that is known for its colorful walls and undulating forms. It’s quite to sight to see in person…if you’re one of the lucky ones. That’s because only a few people will actually see it in their lifetime. The Wave has garnered so much attention that to preserve the land, the Bureau of Land Management had to establish a lottery system allowing only 20 people access per day. You can apply online in advance or enter the in-person lottery day of at the Visitors Center in Kanab (near Parry Lodge). We’re crossing our fingers for you!

With over 4.5 million annual visitors, Zion is easily one of the most visited national parks in the Southwest. Home to incredible rock towers, coppery-red sandstone canyons and 100 miles of wilderness trails, people flock from all over the world to cross this off their bucket list. Among the many trails, Angel’s Landing and The Narrows garner the most widespread attention, despite their difficulty. If you have an adventurous spirit, Zion National Park should be at the top of your list!

With attractions like Rainbow Bridge, Hole-in-the-rock, and Antelope Canyon, Lake Powell is filled with fun things to do and breathtaking sightseeing opportunities. You can rent a paddle board, speedboat or even a houseboat to complete your adventure. Cruise along the large man-made reservoir where over 45 television series and films were shot including Gravity, Planet of the Apes and John Carter.

Did you know that since the year 2000, numerous dinosaur bones have been found at Grand Staircase-Escalate? If you’re a fan of the pre-historic age, this might be enough to convince you to book your trip today. Besides dino fossil hunting, people head to this large remote area for hiking, camping, canyoneering and off-roading.

Looking to find lodging near some of Utah’s biggest attractions? Visit our website to learn more.