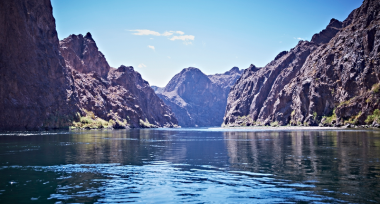 This month we are moving our Smile Spotlight to Boulder City, Nevada where our spotlighted employee is the General Manager of not just one, but two properties: Willow Beach Marina and Black Canyon River Adventures. Cory Ginsky has been fortunate enough to be a part of the Forever Resorts family since he was a child. Since that time though, he has worked his way up, starting in his teenage years, at a number of our properties to become the amazing General Manager that he is today.

Growing up all over the United States, Cory’s family settled in Nevada after his father Steve hired on at Forever Resorts’ Callville Bay Marina location as a boat mechanic. After living in Nevada for five years, his father was relocated to Missouri to work at the Lake of the Ozarks Marina. In that same year, Cory was hired on as a boat detailer, where he helped to clean and maintain all of the houseboats in the marina and worked his way up from there.

After putting all of his hard work into a number of different jobs and responsibilities at the Ozarks, Cory was promoted to General Manager of the property and ran the marina until it closed in 2012. As such a strong asset to the company though, our Regional Vice President, Rod Taylor, provided Cory with a new job opportunity as General Manager at Willow Beach Marina and Black Canyon River Adventures. He took the job right away and has been working there as GM since 2013.

Cory oversees everything that goes on at Willow Beach Marina and our Black Canyon River Adventures locations. From the front desk to the rafts to the nitty gritty of operations in the back of the house, he is constantly on the move to get everything moving like a well-oiled ship. He said he loves working at Forever Resorts and, “with Rod Taylor, he’s a great mentor” and that the business and leadership of his fellow General Managers at other properties keeps him coming back every morning.

When he’s got a bit of free time though, Cory loves to spend time in the beautiful and majestic area of Nevada that they live in, taking any free moments he has to spend with his wife Amy and daughters Morgan, 5, and Marley, 11. Escaping to the water for a daily picnic on a boat while the girls swim in the water throughout the day is his favorite activity to relax and unwind from a busy week of work.

We’re so grateful to have Cory as a part of the Forever Resorts family and can’t wait to see what he will do in the next few decades. Thank you for all of your hard work and continued dedication Cory! Feel free to stop by and say hello to Cory and the crew at Willow Beach Marina or Black Canyon River Adventures, even if you are just stopping by for a day trip from Las Vegas.